“Onstage, everything that we otherwise believe can be divided into crazy and normal blurs. When you experience the Theater Chaosium, such criteria become unimportant. At least onstage, it is good if everyone can be as crazy and as normal as the play requires.” 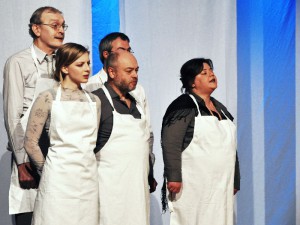 Known well beyond the borders of its region, Chaosium has appeared in such international festivals as Munich and Padua, Italy, and has been invited regularly to events throughout Germany. In 2010, the Theater Chaosium celebrated its twentieth anniversary at the European festival Theaterwahn.

The Theater Chaosium has two ensembles, each of which has one annual production. The basis of its work is theatrical training in the areas of body, movement, voice, dramatic performance, and improvisation. Plays are developed as a search, which circles around a theme the performers choose themselves or in free association with literary works. 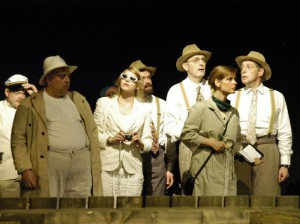 The “Theatergruppe Chaosium” offers an intense engagement with theater. The shared process of invention enables the performers to incorporate their personal experience and to develop and realize dramatically their own ideas and forms of presentation.

The “Chaosium Dienstagsprojekt” is primarily for people who are more involved in outpatient, psychosocial programs. The Tuesday Project has become an insiders’ tip in Kassel’s theater scene, especially in recent years.